All sorts of issues can be involved in aggressive or nervous behaviour in our birds. Perhaps the most underrated issue is also the most common – calcium deficiency.

Did you know that some studies indicate that about 97% of our captive birds are getting less than the recommended levels of calcium and vitamin D3 in their diet? How does this affect behaviour?

Calcium is very important for nerve function. Without it the nervous system (including the brain) doesn't work properly. People, animals and birds without enough calcium in their bodies will be frightened, chronically stressed and are potentially aggressive. Replacing the missing calcium with Calcivet (called CalciBoost in America) given regularly will restore good nerve function and calm the animal.

An excellent example of this is given in our story about a rescued Cockatoo whose diet was so poor that calcium deficiency was only one of its problems. But the very quick improvement in its behaviour after twelve months of difficulty at the rescue centre followed the addition of Calcivet (CalciBoost) to the diet. To read more about this bird read our article on sunflower junkies.

The problem can also occur in birds whose diet may seem to be quite adequate. We recently had a call from a zebra finch breeder whose show team was far more nervous than the rest of his collection. The only difference between the two groups of birds was that the show birds were getting Daily Essentials (vitamins and minerals) and the rest were not. We postulated that they were calcium deficient and recommended a regular dose of Calcivet (CalciBoost). Within days the problem was fixed!

Of course the whole flock was actually calcium deficient. The vitamins in Daily Essentials were simply giving the show team more energy and vitality so they showed the symptoms more clearly. All your birds should get regular Daily Essentials and Calcivet (CalciBoost).

So, if you have any birds whose behaviour contains fear or aggression, try Calcivet (CalciBoost) first! 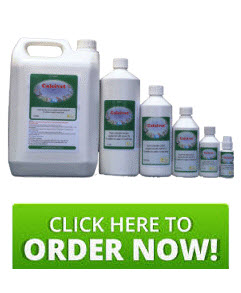